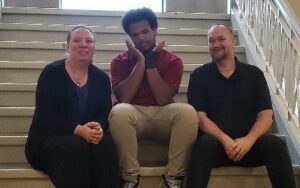 Here’s one foster care story about finding family and how that support brings new opportunities:

Daniel was placed in a temporary Monroe Harding foster home. He would often express how he would love to be adopted, but was unable to express what he wanted in a family. Daniel was very shy but began actively participating in therapy sessions weekly. He eventually built the courage to say “I want a mother and a father”. He was also able to verbalize what he really wanted to his birth mother, and the rest of the team.

Daniel was welcomed to a new foster family home, where he was quickly able to discontinue his medication, was discharged from therapy, started playing football, and he joined chorus and was selected for a solo. To see a youth thrive so quickly within a matter of 8 months was amazing.

When he was adopted, after 998 days in custody, Daniel finally got the family for which he had hoped and prayed. His adoptive parents said, “He has been our son since we met him, but today its official.”

Monroe Harding invites you to host your friends and family and Gather Small in a Big Way TONIGHT at 7:30 PM as we celebrate our young people and families. one.bidpal.net/fosteringjoy2021/welcome
… See MoreSee Less